You are here: Home » Retirement Times – February 2018 » Weather or Not, Stay Invested

Weather or Not, Stay Invested

2017 was one of the strongest years on record for hurricanes in the Atlantic region of the United States and among the costliest of seasons on record, with preliminary estimates totaling over $200 billion. This is the second largest season in damages since 1900, with 2005 having a slightly higher total (Hurricane Katrina).¹ For those not directly affected by the hurricanes or other extreme weather events, some often wonder how it might affect them indirectly, via their investments. Article upon article is quickly spewed out, some with catchy titles that contain minimal factual content (example: “Investors Brace for Hurricane Irma”). While these articles succeed at garnering clicks, they can also lead investors to act irrationally, thinking they can time the markets or shift investments due to pending storm damages.

Thankfully, there exist some helpful studies that show how markets react to these extreme weather events. The first, from Ishuwar Seetharam at Stanford University, shows that natural disasters do have a small effect on companies who are directly exposed.² He looked at over 30 years of data, spanning the top 122 natural disasters. From a timing perspective, the largest effect occurs five days preceding the event to 20 days following. Though this may seem like a no-brainer, other variables can surface which help drive this effect in either direction. For example, if a company has different business lines, or is spread around multiple geographies (to name a few), this can add to or mitigate potential losses.

Diving deeper into the markets by industry, Dubravko Lakos-Bujas, from JP Morgan’s U.S. Equity strategy team, claims that distributors and construction materials are the top beneficiaries from hurricanes, while energy and insurance companies fare the worst.³ He arrived at these conclusions by looking at all of the major hurricane landfalls since 1995. As for the overall market, the losses from hurricane damage tend to revert back to normal levels due to ensuing increases in public and private spending.

Despite a lack of strong evidence from the two studies above, there is another idea that comes from no closer than that of left field, albeit from a highly respected individual. Robert Bruner, dean emeritus and current professor of the University of Virginia’s Darden School of Business, believes that Hurricane Katrina (2005) triggered the 2008-2009 financial crisis.⁴ Like a domino effect, Katrina caused significant damage to housing in the Gulf Coast states, which then triggered credit card delinquencies, and then sub-prime mortgages fell after that. He also claims that other market downturns were triggered by natural disasters, notably referencing the Mississippi flood of 1927 eventually triggering the Great Depression.

One major lesson learned in investing is that you cannot immediately discredit an idea, no matter how unusual it might be. Professor Bruner’s claim might sound strange, but perhaps the overarching claim pertains to vulnerability. Some companies, countries and geographic regions are prepared and built to withstand a natural disaster, either physically, financially or some combination of the two. Both studies above show that certain companies and industries can immediately be affected (via-the stock market) if they are not prepared. Also, keep in mind that a particular company’s preparedness (or lack thereof) can already be priced into the market. The long-term effects, though intriguing, are very difficult to assess because they seem tangential (i.e. hindsight is 20/20).

If conducting the research on affected companies and industries while also factoring in investor sentiment seems daunting, we believe it is best to remain diversified and hold for the long-term.

About the Author, Kyle Olson, CFA
Kyle works as an investment analyst with plan advisors on constructing best-in-class lineups and conducting market and mutual fund research. Kyle is also a member of RPAG’s Investment Committee, where all quantitative and qualitative aspects of the investment due diligence process are vetted and discussed when providing manager recommendations. Kyle graduated with a Bachelor of Arts in economics from the University of Pennsylvania in 2010. 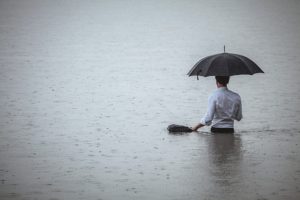